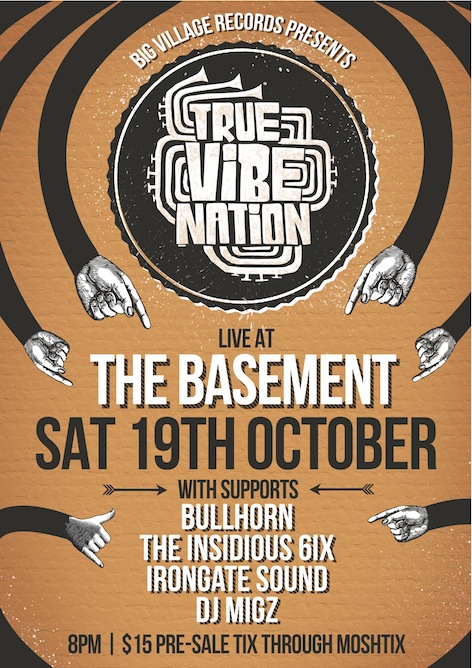 Sydney hip hop rising stars, True Vibenation take over iconic venue The Basement for one special night. Roaring live horns have always been a big part of True Vibenation’s sound and combined with supports from Brisbane’s 9-piece brass band Bullhorn, who are touring their new single ‘Roll Off The Top’, the high energy sounds of Insidious 6ix, Sydney dancehall dons Iron Gate Sound, and champion turntablist Dj Migz, the stage is set for a cracker of an evening.

True Vibenation has had their nose to the grindstone all year and are showing no signs of slowing down. After recording their Standby Project early in 2013 the trio took to the road, releasing the project by concreting USBs loaded with music into walls across the country while on tour.

After completing the ambitious guerrilla art/music project True Vibenation were straight back at it and before the concrete had even dried on the USBs they returned to the studio to work on the follow-up to their first album ‘The Sunshower Phenomenon’, released through Big Village Records in October 2011.

‘The Sunshower Phenomenon’ showed a young group pushing the limits of popular music to create a sound that is fresh, honest and uniquely theirs. The album was named as the Triple J Hip Hop show’s ‘Album of the Week’ and snapped up for rotation. On the back of the album’s success and reputation for their live performance, True Vibenation sold out their album launch at Sydney’s iconic Annandale Hotel and have been touring incessantly, wowing audiences with their infectious energy and killer live show.

After the album’s drop True Vibenation lapped the country on their own headline tour before touring with the Big Village crew, playing Sydney Festival and Subsonic Festival and earning support slots with the likes of Chali 2na, Dead Prez, and Antibalas.

With an ever-growing fan base, tight live show and a penchant for hard work True Vibenation are a group with a bright future in Australia’s evolving hip hop landscape.