True Vibenation combine an irresistible blend of soul and afrobeat backed by big bass, big beats and live horns. Made up of multi-instrumentalists Vuli, Moody and Klue, the trio has developed a reputation for an electric live show, which includes all three artists producing beats and playing horns live on stage, taking them to some of the world’s finest festivals including Glastonbury Festival (UK), HIFA (Zimbabwe), Bushfire Festival (Swaziland), Azgo Festival (Mozambique) and Sydney Festival, as well as being handpicked to support acts such as Ozomatli and Thievery Corporation on their Australian tours.

Drawing from their African heritage and raised in the cultural migrant melting pot of Western Sydney, their sound takes influence in equal parts from Fela Kuti, Hugh Masekela and The Daptone Horns as it does from Outkast, Fat Freddy’s Drop and Rudimental.

On the signing, James Deighton, Head of Poster Child, said: “I’m beyond excited for True Vibenation to be joining the roster here at Poster Child. What the guys have achieved over the past year not only throughout Australia but across the world is nothing short of extraordinary and I couldn’t be happier to be expanding the reach of their infectious and energetic live shows and empowering message.”

True Vibenation added, “Poster Child is an amazing agency and we’ve seen them build great things with their roster of talented artists.

“They hold a really interesting place in the market in the middle ground between live and electronic music, which is a great fit for what we do, and we’re really excited for the partnership.”

True Vibenation’s latest single ‘Squat’, a collaboration with Haiku Hands, was added to rotation on triple j and as well as gaining support from tastemaker blogs such as NME, Pilerats and Purple Sneakers. While their previous release ‘The World Is Ours’ peaked at #1 on Spotify’s Viral Chart in the UK and #4 on the Global Viral Chart, was added to triple j and was supported by international blogs Afropunk, Indie Shuffle and Acid Stag.

2019 is shaping up to be an even bigger year with the release of new music, and short film, as well as return tours to Europe and Australia in the works.

“Their recipe for success is unlike any other, soul-infused hip hop tunes with a little bit of Latin funk and a solid dose of skilful delivery; a concoction unlike any other.” – The Music

“They’re always reliable, but this is the best thing they’ve ever done I reckon. 4 ½ stars.”

“Effortless in every sense. As always with the TV boys, there’s a unique blend of sounds that guarantee to make you feel good.” – Declan Byrne, triple j 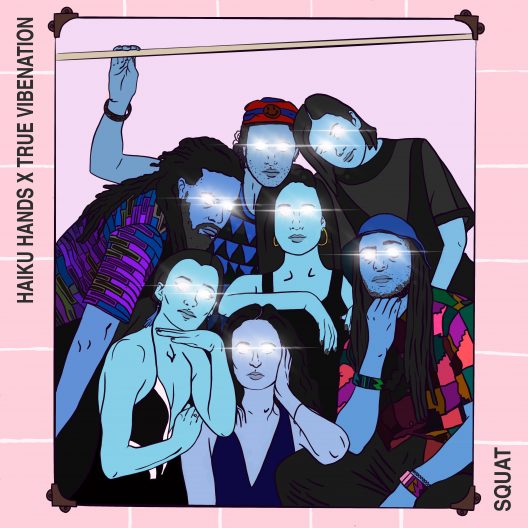 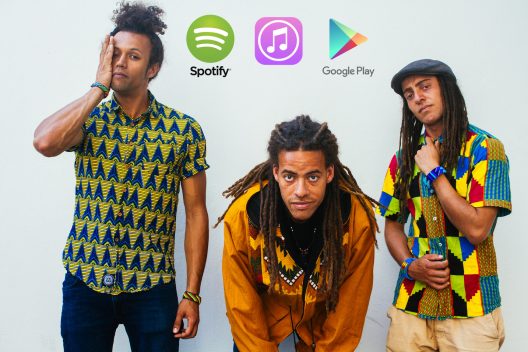 True Vibenation have just released their infectious tune ‘Tell Me’ ahead of their European tour.

Blending elements of soul, afrobeat and Australian electronic music, all backed by True Vibenation’s signature horn section ‘Tell Me’ was inspired by the band’s recent relocation to Europe for summer. The song speaks of the chance dancefloor meetings that come with festival season and the uncertainties around what they mean and where the ride ends.

Backed by tight afro-flavoured production and warm synths from Vuli, the song was recorded in Berlin across different studios in between the madness of festival season with vocals that nod to soul greats such as Otis Redding and Marvin Gaye.

The group has had a busy 2018 with tours to Zimbabwe, Reunion Island and Australia while still managing to find time to get in the studio to work on their upcoming short film project, which was made in collaboration with film maker’s and afro dancers from Australia. 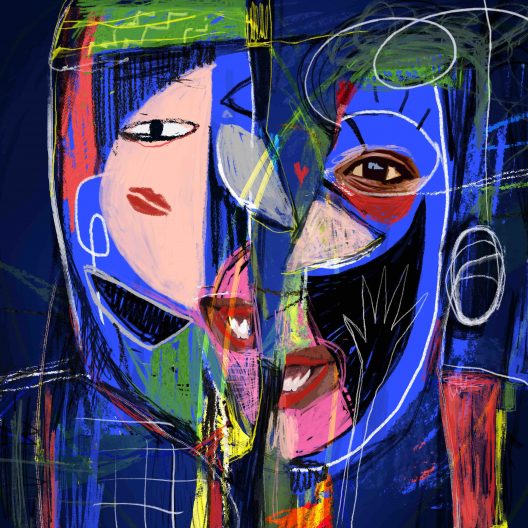 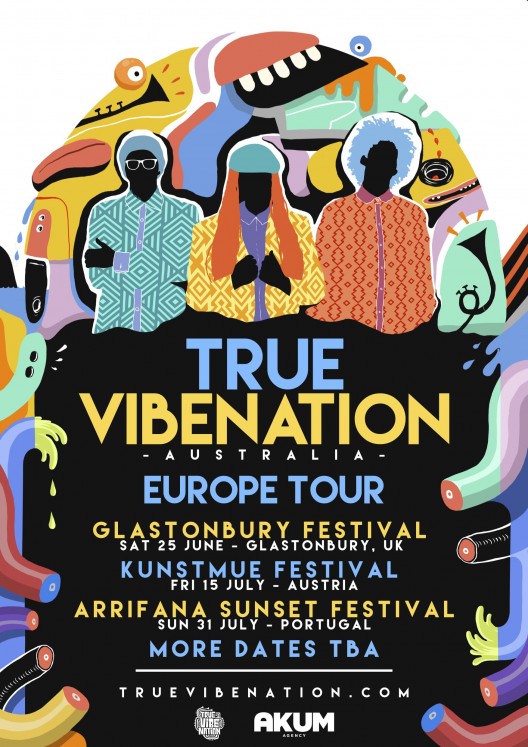 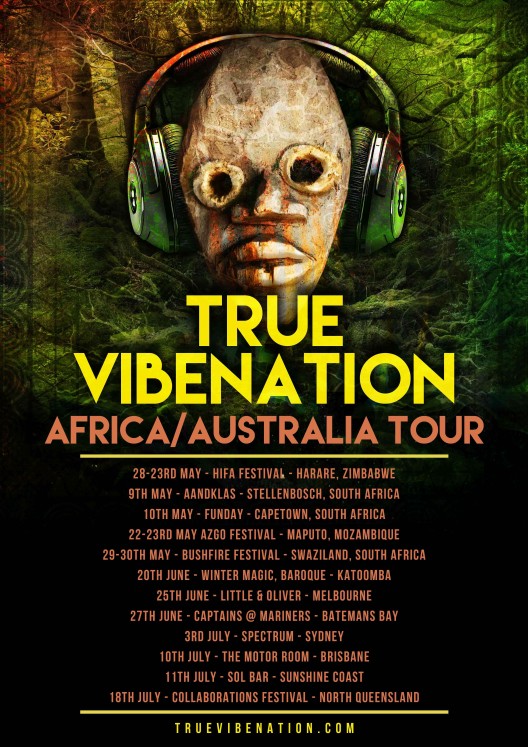 It’s a been a crazy ride since Sydney hip hop/producer trio True Vibenation put out their second album ‘ON’ 9 months ago.

Now the trio returns home for the Africa/Australia tour to continue the party with their brand of electronic beats, live horns and deft lyrics for a show that leaves every ounce of energy on stage and the audience grinning from ear to ear.

Made up of twins VULI and Moody and childhood friend Klue, the trio hailing from Sydney’s inner-west, has developed a solid reputation for an electric live show and sound which is just as comfortable alongside a live band as it is in an electronic setting. They even have a self-made instrument that literally turns audience members into human drum machines!

With hundreds of shows under their belt, festival slots at Sydney Festival, Peats Ridge, Future Music, Secret Garden, Subsonic, Woodford and Changing Lanes as well as support slots with Jurassic 5, Chali 2na, Dead Prez, Foreign Beggars, DJ Kentaro, Horrorshow Thundamentals and many more, True Vibenation are ready to play for their fans and add some new ones. 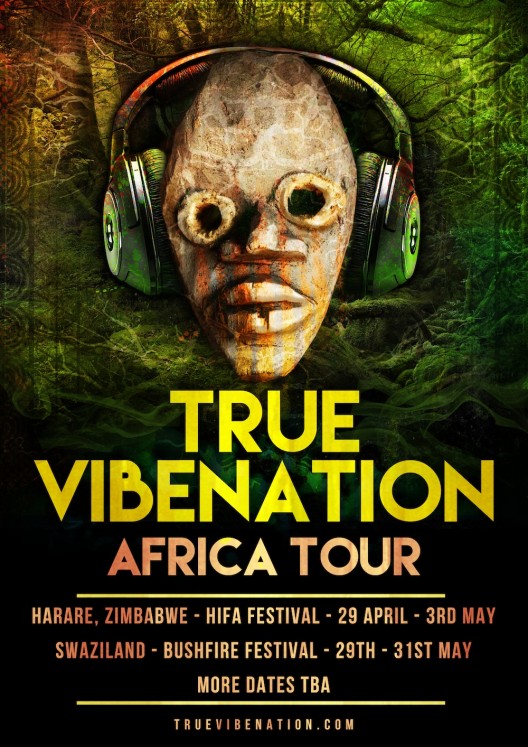 After carving a path in the Australian music scene with a bold voice and universal message they prepare to take their infectious live show to the rest of the world.

The trip is significant not only as the band’s first international tour but marks a return to the birthplace of members Verbaleyes and Native Wit where they will kicking off the tour at HIFA Festival, Zimbabwe before continuing south for more shows in South Africa and Swaziland.

‘Normally with our shows we feel like we bring a bit of Africa to Australia but with this tour we’ll be bringing a bit of Australia to Africa.’ Says Verbaleyes.

With main stage slots alongside international legends such as Salif Keita and Les Nubians the Australian trio are set to burst on to the African scene with their brand of electronic beats, live horns and deft lyrics.

Since the release of their sophomore album ‘ON’ through Big Village nine months ago True Vibenation have been hitting the touring circuit hard with a live show that delights in sending the audience in to a wild frenzy.

With another Australia tour planned for their return and multiple new projects on the way True Vibenation are keeping their noses to the grindstone in 2015. 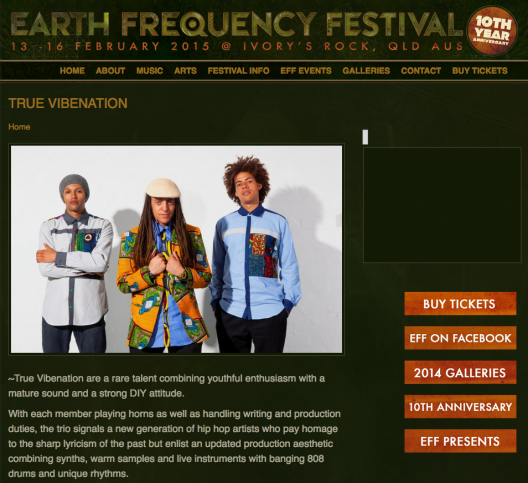 True Vibenation have been added to Earth Frequency Festival’s biggest line-up yet. 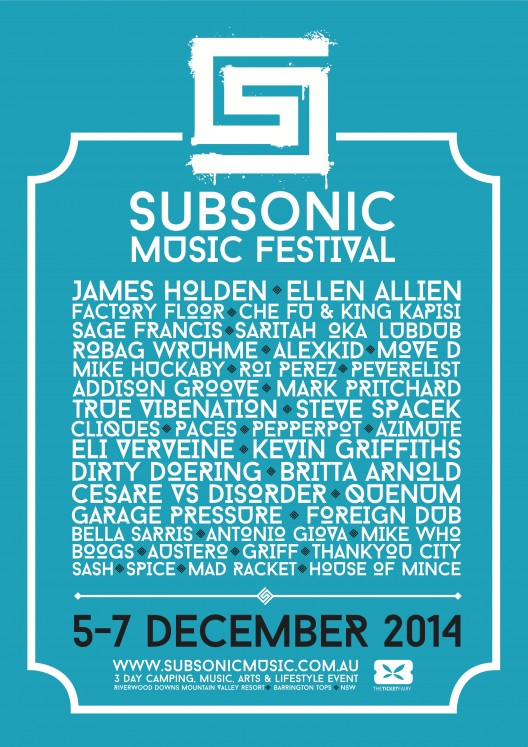 True Vibenation will be at Subsonic Music festival on December 6th.

It all goes down on December 6th at 3pm. Get tickets  HERE 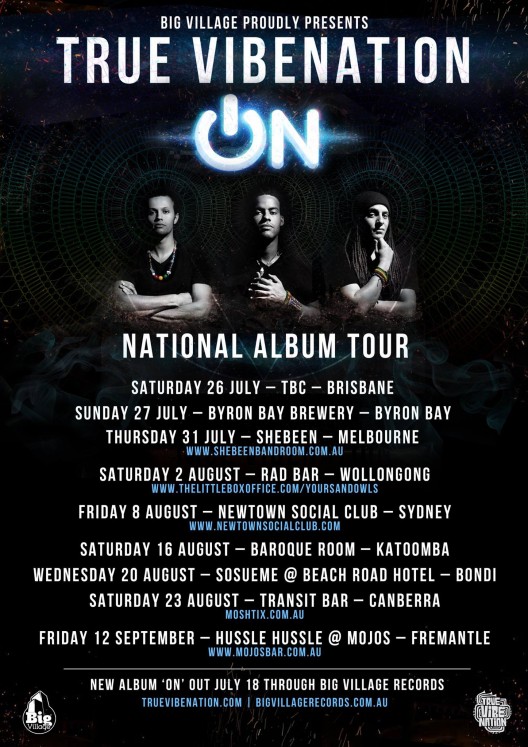 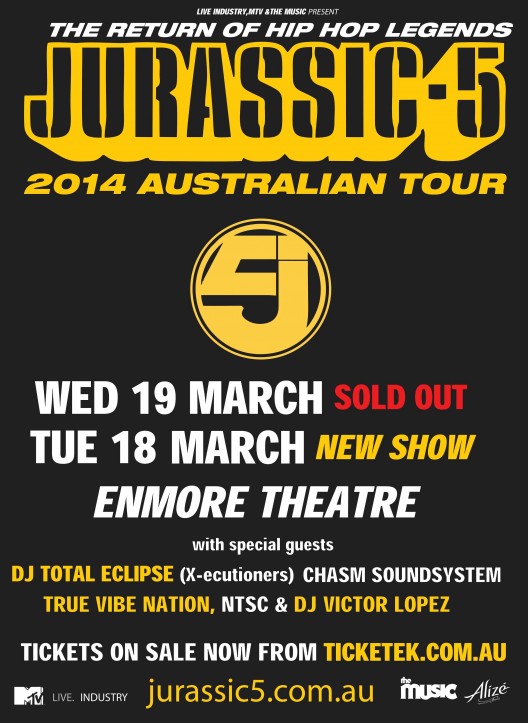 True Vibenation will be supporting hip hop legends Jurassic 5 on both of their Sydney tour shows! tix at ticketek.com.au